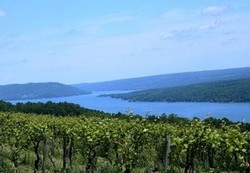 Cool-climate viticulture and the Finger Lakes. This is only the first of what I hope to be many blog entries pertaining to cool-climate viticulture and the role the Finger Lakes could play in the American wine market. To most wine drinkers, familiar with both European and American wine regions, there is an inescapable paradox, which can be kept down for a while, but sooner or later has to surface. In Europe, the cool climate wine regions have historically held privileged positions in the minds of wine aficionados.

Think: Mosel, Champagne, Alsace, Loire Valley, Burgundy, Bordeaux and Piemonte. While subject to considerable vintage variations resulting from their limiting growing season, these regions have nevertheless been associated with the very finest wines produced in the World. Understanding the sources of the vintage variations, wine drinkers anxiously await the reports describing the growing conditions of a particular vintage. It is understood, that only a few privileged regions provide the necessary conditions to produce wines of such reputation and interest and that these wines command a premium. It is perhaps because the grape growing and wine making conditions in these cool-climate regions are more challenging, that they have received most of the attention over the last 200 years. It is perhaps also because of the intrinsically higher quality potential, as defined by the consumers, that they have been held in high esteem.

Contrast this scenario with what has been happening on the American wine scene. Not including the Jefferson-era East Coast attempts or the native Labrusca as well as French-American hybrids, the action was long restricted to the West Coast. Despite sometimes significant climatic differences, I will contend that nearly none of the West Coast wine regions would qualify as cool-climate regions. I base this contention on two essential criteria: cool-climate viticulture severely limits the grape varieties suited to that region and, equally important, the wines produced retain essential cool-climate characteristics: moderate alcohol, noticeable acidity, fresh fruit aromas and significant aging potential. While many West Coast regions meet certain of these criteria, I do not believe that any meet all of them. On certain occasions, you could argue that the natural conditions are there, but than wine makers ( and winery owners) choose to bend the natural conditions to the point of loosing the regional character of their wines. I could easily be wrong on this point and would welcome corrections.

In the United States, I would limit the significant cool-climate wine regions to the following: Michigan, Parts of Pennsylvania, Long Island and the Finger Lakes region of New York. I know there are noteworthy producers of interesting vinifera wines in other regions, such as Millbrook in the Hudson Valley or Sakonnet in Rhode Island, but they remain isolated. Returning to the initial paradox, my question is this: why have the cool-climate regions in United States received so little attention? As a winemaker in the Finger Lakes region I’m primarily concerned with our region. Why has our wine region, at least until very recently, failed to attract the attention of the American wine drinkers and wine professionals? From my point of view, there is nothing more exciting than a cool-climate wine region maturing to produce interesting noteworthy wines. To be able to follow this rapid evolution is a unique insight, that none of us could experience in Burgundy or Bordeaux. Much like these regions, vinifera winemaking arrived later in the Finger Lakes than it did in California, Oregon or Washington State. The same was the case in Europe, where winemaking followed up the Rhone Valley before spreading to the northerly wine regions. In Europe, the spread of viticulture took centuries. In North America, we are essentially talking about four decades.

There will always be great spread in quality and style in new wine regions. This is even more true in a cool climate region such as ours. However, our region has the potential to produce wines with a balance, an elegance, a purity of aromas that simply cannot be duplicated in a warmer climate. This is why the cool-climate regions of Europe are now considered the classic regions. Just following this evolution in our region would be a worthy endeavor, so why has this not happened yet?