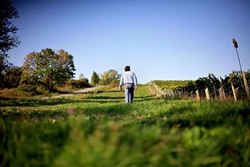 Eric Asimov visited Ravines Wine Cellars during the 2011 Harvest season:”I was a bit starstruck when he came to the tasting room because I have appreciated his work for years, but he is a super-nice down to earth man,” reflects Lisa Hallgren. “He said he was ‘blown away’ when he first tried our Riesling and that was such a big complement for us.  Not everyone appreciates the focused, minerally style we make as it’s very different than other Finger Lakes producers, but Eric likes it and his opinion means a lot to us.”

Morten Hallgren in a Finger Lakes vineyard. Photo by Nathaniel Brooks for The New York Times

Ravines Wine Cellars, one of the best producers, makes a wonderful dry riesling. I drank a 2009 and liked it so much that I bought a case, for just $14 a bottle. Ravines also makes a superb riesling from the Argetsinger Vineyard above the east bank of Seneca Lake. The lakes, deep claw marks left in the earth of west-central New York by glaciers moving south from the Hudson Bay, are as much a part of the winemaking culture here as tough vintages like 2001. The great depth of their waters nudges this otherwise inhospitable region to a level of bare tolerance for the fine wine grapes planted on the lakes’ slopes. In winter, the lakes almost never freeze, moderating harsh cold to protect the dormant vines, while in summer they air-condition the vineyards.

“The whole cool-climate viticulture thing is lacking on the American wine scene,” said Morten Hallgren, the winemaker and owner of Ravines with his wife, Lisa. “It shows a bright future for the Finger Lakes.”

DINER’S JOURNAL: THE GOOD LIFE COMES A LITTLE HARDER IN THE FINGER LAKES

The best vineyards are planted on slopes surrounding the lakes, where they benefit thermally from the lake effect: in the summer, cool breezes from the lakes ease the heat, while in the harsh winter, warmth retained by the lakes prevents the vines from freezing.

Closer to the lakes, vacation homes occupy the shores, each, seemingly, with its own dock, along with the occasional resort. The flat, fertile land in between the lakes serves old orchards and dairy farms. A significant population of Mennonites lives in the land between the lakes as well. Numerous signs warn motorists to be aware of horse-and-buggy traffic.

Tourism is important to the region, but it’s not the wealthy sort of wine country tourism more typical in California.

It’s not Napa, but it has some outstanding wines and lovely scenery.